Women are now the majority of undergraduate students studying STEMM subjects at universities or colleges in the UK.

Well, it had to happen.

STEMM means science, technology, engineering, mathematics and medicine. Traditionally this area was dominated by men. Not any more.

Those whose business it is to track equality issues know this full well. For example, the Bristol University annual report on Diversity and Equality, 2013/14, whilst concentrating mostly on issues pertinent to that university, contains the statement,

Across the sector as a whole, a slightly higher proportion of female students were studying STEMM subjects (51%)

On 5th January 2016, the university admissions service, UCAS, published data on the numbers of men and women accepted into UK university or college undergraduate courses in 2015. The data was broken down by subject as well as by sex, and consistent data were provided for each year from 2007. The pdf file is UCAS: DR3_019_01 Acceptances by Detailed subject group and sex (All). These data can be used to deduce the percentage of excess women over men across the STEMM subject areas. The result is shown in Figure 1 below. 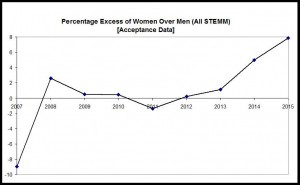 But still the daily ear-ache about “women in STEMM” continues.

Details underlying the derivation of Figure 1 from the UCAS data follow.

The percentage excess is defined here as 100(w-m)/m.

The UCAS data is presented against 194 subject areas. There are more women than men studying 129 subjects out of 194 (66%), i.e., women dominate twice as many subjects as men. I have rendered this unwieldy number more manageable by combining subjects into the following 16 umbrella areas,

The first 9 of these areas are the STEMM subjects.

The exact UCAS subjects used to define each of these areas may be found in this Excel file.

The numbers of men and women accepted at a university or college to study these subjects as undergraduates in 2015 are given in Table 1 below.

Men still dominate in the physical sciences, mathematics, computing and engineering. Women’s greater overall presence in STEMM is due to their dominance in medical and biological subjects. This is illustrated by the percentage excess of women over men broken down by STEMM subject area in Figure 2 below. The negative data indicates men’s dominance over women. 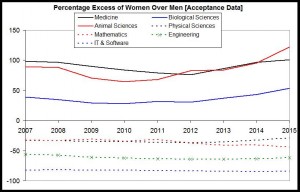 Psychology and nursing would not fit on the scale of Figure 2. There are four-and-a-half times as many women studying psychology as men. Given the situation with male suicide, a mental health issue, one has to regard this as unfortunate. Of course the mantra is that men and women are identical so it should make no difference. But they aren’t, and it does. It is not healthy that those entering the psychology professions are so gender-skewed.

Although men outnumber women in Architecture and Building, this is due mostly to the Building component. In Architecture there is near parity (2,345 men versus 2,185 women).

In law, there are now twice as many female students as male students (8,785 men versus 17,475 women). Still, at least men get a fair hearing in the criminal justice system, eh? So no need to worry.

In languages and cultural studies there are approaching three times as many women students as men (6,640 men versus 18,735 women).

Surely the most egregious gender disparity is in Teaching & Education, where there are nearly six times as many women as men (3,040 men versus 17,397 women). One is tempted to suggest that this particular disparity might be instrumental in causing the rest.

The most extreme case is nursing, where there are nearly ten times as many women as men. But even excluding nursing, there are twice as many women as men studying medical and dental sciences (10,985 men versus 22,050 women). Not all these will relate to becoming doctors, but women’s dominance in all subjects contributing to this area is clear. In fact, female medical students have outnumbered male medical students by roughly 50% for four decades. The result is that last year female GPs outnumbered male GPs for the first time. As regards the total number of doctors, women are set to outnumber men by next year. But already female doctors outnumber male doctors by ~50% in the under 30 age range.

There are particular issues associated with gender balance for doctors because of the parlous state of the NHS and the cost of training doctors. Male feminist and surgeon, Professor J Meirion Thomas, has opined that the large number of women doctors is having a detrimental effect on the NHS: “the reason is that most female doctors end up working part-time – usually in general practice – and then retire early. As a result, it is necessary to train two female doctors so they can cover the same amount of work as one full-time colleague.” At around £0.5M a time to train a doctor, and about 4,300 new women doctors entering the profession annually, this is a significant financial loss. He continues, “There is another important issue. Women in hospital medicine tend to avoid the more demanding specialities which require greater commitment, have more antisocial working hours and include responsibility for management“. The difficulties facing A&E departments have been much in the news recently. This is a particular area which women doctors tend to avoid, thus leaving the task to the reducing proportion of male doctors. Are the two things related?

Dame Carol Black, former president of the Royal College of Physicians, pointed out this growing discrepancy (between the genders in taking up more demanding roles) in 2004, when she controversially suggested that the feminisation of the medical profession would lead to its degradation. She said the issue was not whether women doctors could do their job properly, but whether they were willing to devote time and effort, beyond their clinical responsibilities, to activities such as committee work and research.

Politicians are concerned, too. In a Commons debate in June (2013), Anne McIntosh, a Tory MP, said that women doctors who had received expensive medical training but went part-time after starting a family were a huge burden on the NHS. In reply, Anna Soubry, then a health minister, agreed that they were a drain on resources. Within hours, after angry responses, some from the British Medical Association and the Royal College of GPs (two professional bodies opposed to any meaningful reform of general practice), Ms Soubry was forced to retract her comment and apologise.

Of course, it is perfectly reasonable that women should have career breaks to have children. But is part-time working on such a large scale in the public interest, even if it is considered perfectly acceptable by our ultra-politically correct NHS management? GPs are very well paid. Their average salary is around £103,000 – quite sufficient for a woman doctor who is also a mother to be able to afford quality childcare at home. But the salary also means that part-time working still allows for a comfortable lifestyle. In addition, doctors tend to marry within their own socio-economic group and, in many cases, the wife is the secondary earner. This also encourages less demanding part-time work.

Professor Thomas has since been suspended from his job and ordered not to air his views about the NHS again. But I digress… 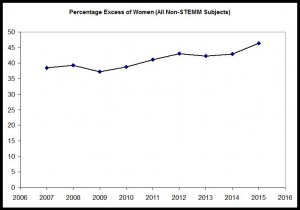 So, men are no longer dominant in STEMM and are greatly, and increasingly, outnumbered in non-STEMM subjects. The result is that the total number of people (men plus women) studying subjects in which men dominate accounts for just 24% of all undergraduate students (at the start of the course). The remaining 76% of undergraduates are studying subjects dominated by women.

Overall women are now 35% more likely to go to university than men. But, as usual, the male disadvantage is concentrated on the lower socioeconomic strata. Considering only people from disadvantaged backgrounds, women are now 52% more like to go to university. The focus on “women’s equality” is driving inequality, not only in terms of a widening gap between the sexes but also in terms of increasing the gulf in academic performance between socioeconomic groups. Women’s equality is inequality in more ways than one.

If the disparity has its origins in early primary schooling – or in society as a whole – then we are already committed to perhaps 15 years of further diminishing in male performance at degree level, if current trends are indicative. Just what effect this might have on society in 10 or 20 years time is frightening to contemplate. At one end of society, women may become pressured into bearing an ever increasing proportion of the economic burden, whilst being strongly disinclined to do so. At the other end of society, educationally failed males will multiply in both number and disaffection, becoming of negative economic value. Those pushing the toxic masculinity narrative will have their pyrrhic victory in a self-fulfilling prophecy. No doubt Athena Swan will still be rumbling on.

18 thoughts on “Women Dominate in STEMM”