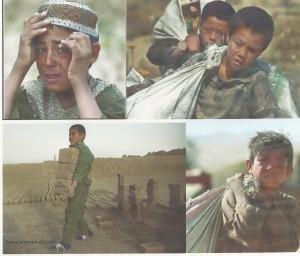 My acknowledgements once again to Ali Mehraspand, the Iranian engineer whose writings (and pictures) I have plundered as the inspiration for this piece. Any mistakes are my own.

Ref.[2] tells us that, “Afghanistan is a patriarchal society where all the major institutions are controlled by men” and that, “Almost every woman in Afghanistan is hidden and isolated from the outside world.” These are the things we expect to hear. And yet the same author, in Ref.[3], says,

“Securing women’s rights has been one of the main goals particularly of the UK’s intervention in Afghanistan. Over the past decade, the UK government has helped achieve much, including a new constitution which enshrines equal rights for women and men and a landmark Elimination of Violence Against Women (EVAW) law. Just over 27% of members of parliament are female and women fill a quarter of government jobs. Over two million girls are now in school – four in ten of all pupils – and many women are free to participate in public life and to work outside their homes, as doctors, teachers, entrepreneurs and lawyers.”

And Ref.[4], I discover, was written by a (female) former Afghanistan Minister for Women, with many influential connections. Not quite that patriarchal, then. And certainly this women is not hidden and isolated from the world.

I guess (and it is only a guess) that outside of Taliban control, women’s position in Afghanistan is indeed considerably less repressed than its public image. On the other hand, I can well believe that where the Taliban is in charge, suppression of female freedoms is the order of the day.

What is certainly true, however, is the immense amount of feminist hand-wringing over the plight of Afghan women. Refs.[2-6] are just an illustration. You can follow links to a huge literature on the matter, including much feminist-driven interest from the EU, such as Refs.[7-10]. Of course, there is nothing wrong with this per se. Much of it will be very valid concern.

My difficulty is my usual difficulty: what about the other half of the story?

The impression we get is that, since these women are being oppressed by the patriarchy, said patriarchs must be having a whale of a time, living the life of Reilly. But what is really happening to males?

For a start, am I alone in finding it strange to talk about Elimination of Violence Against Women in a country which has been a war zone for decades? Even if we start the death count only from the US invasion in 2001, and hence ignore the even bloodier Russian occupation, we get this death toll by mid-2014: 13,700 Afghan forces; 3,466 coalition forces; ~20,000 Afghan civilians; and between 20,000 and 35,000 Taliban or other insurgency forces. So, a total of around 60,000 to 70,000 deaths, plus a far larger number of casualties. And, of course, virtually all of these deaths and casualties will have been men. It is against this back-cloth the feminists continue their usual mantra of Elimination of Violence Against Women. It would be impressive if it were not so obnoxious.

The virulent combination of western feminism and Islamic legal tendencies to protect women excessively have led, according to Ali Mehraspand, Ref.[11], to the following interpretations of Violence Against Women,

But that is all by way of introduction. It was not any of that I wanted to regale you with on this occasion. It is the boys that are really exercising me.

Recall that in Islamic law it is the male of the household who is responsible to provide for the family. There is no such responsibility placed on women. Recall from Ref.[1] the obligation of the male householder to supply the women of the house with their due Nafaqa, the money for all domestic expenses. Now imagine how many Afghan households are without any able bodied adult male, due to the fighting. If the husband is not dead or seriously hurt, he may be away fighting. In this situation the responsibility for providing the Nafaqa falls to the sons. There must, I suppose, be an age limit. But whatever it is, it is certainly very young indeed. It is common for boys as young as 9 or 10 to be placed in that position of responsibility.

Nor is this merely a ceremonial or formal responsibility. It is an actual obligation to acquire money – enough for the family to live on. There is no obligation on the women of the household to provide for themselves. The culture is such that women feel entitled to be provided for. They feel no shame about this, even though it may involve a very young boy providing for several far older women.

So it is that a 10 year old boy may be obliged to prostitute himself in order to provide for his own mother and several able bodied, and perhaps far older, sisters. This is not rare. This is commonplace.

How could women in this position not be ashamed? The answer is that their culture does not necessitate any shame – it is the accepted norm. You will do well to recall this reality when western feminists described such women as the victims of a patriarchy. Their freedoms are curtailed, certainly, but on the other hand they are also the beneficiaries of a system which places the really arduous task upon the male – of however tender an age.

And there is a further twist. Quite possibly the women would not even be allowed to seek work under regimes as harsh as that of the Taliban. But if they were (and it seems that many Afghan women do work) the Islamic law allows such a woman to keep all her earnings for herself. She is under no obligation to use her own money to support her family. That obligation always lies with the male – to provide the Nafaqa.

And it gets worse. In the case of Afghanistan, due to the endless wars, huge numbers have fled to neighbouring countries as refugees. This includes Iran, where there are an estimated 3 million Afghan refugees, less than 1 million being legal. The overwhelming majority of these refugees are male. A very large proportion are children, and the overwhelming majority of these children are boys. Visit Tehran, or most other Iranian cities, and you will see these boy refugees. There are ~1.9 million boy labourers in Afghanistan itself, and probably more than that number again in neighbouring countries.

60% of rape victims in Iran are male. Iran’s chief of police said that the victims were mostly child labourers (Ref.[11]). There is a long tradition of rape or sexual exploitation of boys in Afghan culture. Where such things are organised they are known as Bacha Bazi or “dancing boys”. Popular but discreet, “being into kids” or “boy play” happens all over Afghanistan. Unlike in the west, paedophilia against boys, though not officially approved, does not carry heavy stigma. (Girls, in contrast, are protected by their families. A deflowered girl becomes a marriage problem). A documentary on the phenomenon can be found at Ref.[12].

But the truly awful thing is that these poor boys are suffering this dreadful life simply so that they can send back virtually all their meagre earnings to their mother and sisters back home. The work is viciously hard and deaths are commonplace.

Ali Mehraspand, Ref.[11], says he has known 6 Afghan men personally who have died on the job, one of them whilst working on his parents’ house. He observes their parsimonious habits thus: “When they take a little time to have lunch under the red-hot sun, I have witnessed the painful scene of their shopping for lunch: some soda and some bread. They tear up the bread to pour in the soda. They then fill their spoon with the soda-dipped bread to eat as if it was a steak sandwich. Why? You see, because the money is not to be wasted on luxuries like food while their mother and sisters back in Afghanistan expect it. Here in Farsi is a story of an Iranian woman who bursts into tears after 10 years of having Afghan apprentices when she says that these men send all the money back to their families in Afghanistan.”

Quoting Ali Mehraspand, Ref.[11], again, “Every now and then, self-righteous idiots remind us that they would rather be a man in Afghanistan. They of course do not have the slightest clue what the fuck they are talking about. Being an Afghan man means to continue to be a sweat machine to provide where provision is so difficult that 50% of children suffer from malnutrition. Being an Afghan boy means to be a child labourer, perhaps in some other country, just so you can send back the money for female family members. Being an Afghan boy means facing more threats of sexual abuse and forced labour. And labour in the minds of Afghan men and boys is extreme labour.”

Anyone reading this please remember that this is what the international feminist machine keeps hidden, deliberately. Their agenda to pursue female advantage relentlessly is being prosecuted by pedalling half truths that are a whole lies. Feminist brains do not register male suffering, even though it be that of millions of small boys. So next time you hear some privileged, western women, like Lauren Laverne (Ref.[13]) whinging about a non-existent pay-gap that they find ever so oppressive, perhaps you could acquaint them with this example of real gender-based disadvantage – the Empathy Gap.