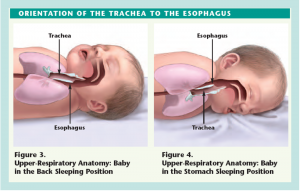 Data on child homicides, and the perpetrators thereof, is subject to considerable obfuscation. The incompleteness and inconsistencies in child homicide data have been well described by Robert Whiston and Nigel Hawkes, and the overall picture is summarised in http://mhrm.uk/wiki/killing-children/. In a forthcoming post I will return to this issue with particular emphasis on perpetrators.

The present post is by way of being a precursor to this. Here I look first at the data on all child deaths. The overwhelming bulk of these are from natural causes. Nevertheless the data reveals some interesting features, not least the dependence of child death rates on marital status, cohabitation and lone parenthood.

It has long been argued that a certain, but unknown, percentage of unexplained infant deaths are actually covert homicides. This, then, forms the link with the planned subsequent post.

Sources/references are listed at the end of the post.

All Deaths in Infancy and Childhood (England & Wales)

This section addresses child deaths from all causes. Data is taken from Ref.1. Terminology,

Figure 1 shows how the number of infant and childhood deaths has reduced since 1980, presumably because of improving health facilities. Figure 2 expresses this data as the death rate per 1000 infants or children of the same age range. This Figure drives home the far greater probability of infant death than childhood death. In 2014 an infant was 36 times more likely to die in that year than a child aged between 1 and 14. (However, such a child needs to survive for 13 years. Even so, infant death is 3 times more likely than dying at any age between 1 and 14).

Figure 1: Deaths of Infants and Children (click to enlarge – applies throughout) 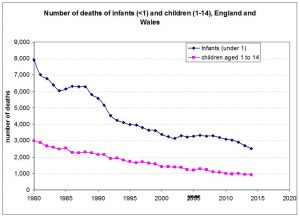 Figure 2: Death Rates of Infants and Children per 1000 per year 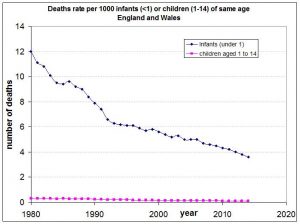 This section again addresses all infant deaths, from whatever causes, and looks at how infant death rates vary according to whether the parents’ are married, cohabiting or not cohabiting. Where the parents are not cohabiting there is data available which distinguishes between joint registrants and sole registrants (that is, whether two names or just one appear on the birth certificate). Sole registrants can be taken to be single mothers to an extremely good approximation.

Note that the marital status and living arrangements discussed here refer to the status when the baby’s birth is registered.

Figures 3, 4 and 5 compare the infant death rates for parents with various different living arrangements for the years 2014, 2013 and 2012 respectively. It is striking that, in every category and for every year, death rates per 1000 increase in the following order,

Figure 6 plots death rates for lone-living parents against those for married or cohabiting couples of the same socio-economic class, plotting neonatal and post-neonatal deaths separately and taking data from years 2012, 2013 and 2014. The data are rather noisy because the statistics are small. Nevertheless it is clear that the data scatter roughly equally on either side of the line of equality. This indicates that living as a couple or living as a single parent makes no discernable difference to infant death rates providing that the comparison is done for the same socio-economic group in both cases.

The clear differences in infant death rates according to living arrangements seen in Figures 3-5 result from the correlation of living arrangement with socio-economic status. It is socio-economic status which emerges as the underlying factor behind the higher death rates. Nevertheless it is a statistical fact that an infant is more likely to die in a lone-parent home than a two-parent home, especially if the two parents are married. If the lone parent in question were wealthy, this would not be the case. Most lone parents are not wealthy.

We will see below that a very different picture emerges for unexplained infant deaths. 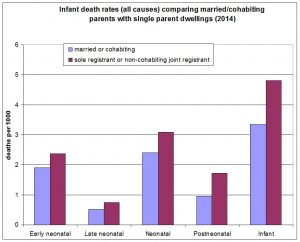 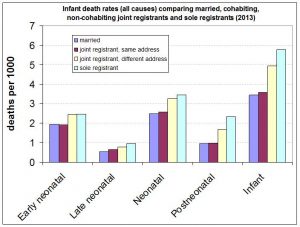 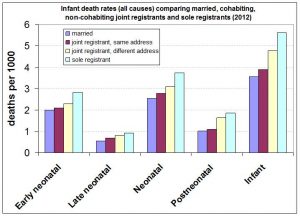 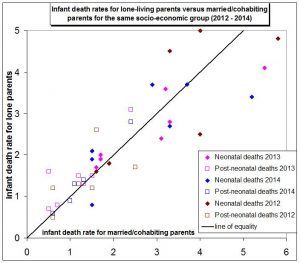 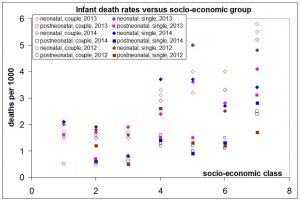 When the cause of an infant’s death is unknown, pathologists have a choice between two categories: sudden infant death (SID, colloquially known as ‘cot death’) or the category “Unascertained” death. Ref.2 provides the following clarifications.

Sudden infant death, which was first recognised in the early 1960s, is defined as, “the sudden unexpected death of any infant or young child which is unexpected by medical history and in which a thorough post-mortem examination fails to demonstrate an adequate cause of death”.

“Unascertained” is used by pathologists when the death does not fulfil the criteria used for sudden infant deaths and there is still doubt about its cause.

There is evidence to suggest that these terms are used interchangeably by coroners  and research has shown that the characteristics of babies dying of these 2 causes are very similar. Based on this, it is appropriate to include both groups in any analysis of unexplained infant deaths.

Hence the term “unexplained death” is used by ONS to mean either SID or cause of death “Unascertained”.

The ONS over-view of unexplained infant deaths in England & Wales is Ref.2, with the methodology laid out in Ref.3. However, as is often the case with ONS bulletins, the most interesting data is frequently not found in the ‘top level’ of the statistical bulletin, like Ref.2. Instead it is necessary to hunt a little deeper. Doing so for unexplained deaths results in the latest Excel data file, Ref.5. This includes unexplained infant death statistics between 2004 and 2014 and is the source of the data used here.

The number of unexplained infant deaths is plotted against year in Figure 8, showing separately the numbers for various marital and living arrangements.

In 2014 there were 46 unexplained infant deaths amongst married parents but nearly four times as many, 166, amongst unmarried parents. This is despite the fact that there are similar numbers of married and unmarried people having children (see Table 2).

Note that the effect of living arrangements on unexplained infant death rates is far, far more marked than its effect on the totality of infant deaths as indicated by Figures 3-5.

In the case of the totality of infant deaths, the dependence of the death rate on parental marital status and living arrangements was found to be a result of socio-economic class (Figures 6 and 7). In the case of unexplained infant deaths, however, there is a far greater dependency on parental marital status and living arrangements which requires explanation. Figure 10 plots the unexplained infant death rate for unmarried joint registrants against that for married couples for the same broad economic class (characterized here as professional, manual or intermediate).

Figure 10 is very different from Figure 6. All the data plots well above the line of equality, implying that economic class alone is insufficient to explain the higher unexplained infant death rates amongst unmarried joint registrants compared to married parents. Whilst there is, as expected, a clear dependence on socio-economic class, for the same socio-economic class unmarried joint registrants have a greater unexplained infant death rate than married couples (about double).

The data has also been plotted in histogram form against the three broad socioeconomic groups in Figure 11, illustrating again the fact that a clear difference of about a factor of 2 exists between unexplained infant death rates for married and unmarried joint registrants even when compared for the same socioeconomic group. 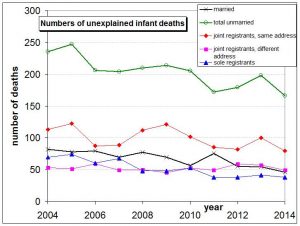 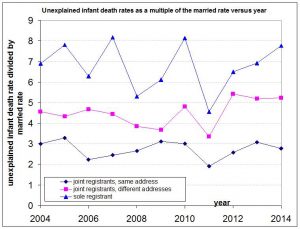 Figure 10: Unexplained infant death rates for married couples versus that for unmarried joint registrants for the same socio-economic group (2004 to 2014) 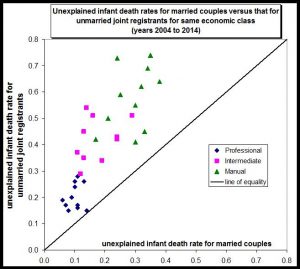 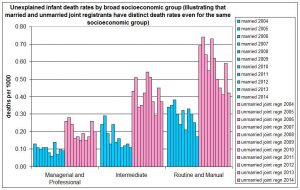 More difficult to understand is the difference between unexplained death rates for married couples and cohabitees (Figure 9).

There is little doubt that a non-trivial proportion of SIDs are in fact homicide. Steven Kairys et al, Pediatrics February 2001, 107, Issue 2, observe,

“Recently, well-validated reports of child abuse and infanticide – perpetrated by suffocation and masqueraded as apparent life-threatening events (ALTE) and/or SIDS – have appeared in the medical literature and in the lay press.

Parents of infants with recurrent ALTEs have been observed trying to suffocate and harm their infants. In Great Britain, covert video surveillance was used to assess child abuse risk in 39 young children referred for evaluation of recurrent ALTEs. Abuse was revealed in 33 of 39 cases, with documentation of intentional suffocation observed in 30 patients. Among 41 siblings of the 39 infants in the studies, 12 had previously died suddenly and unexpectedly. Although 11 of these deaths had been classified as SIDS, 4 parents later admitted to suffocating 8 of these siblings. Other cases previously thought to be multiple SIDS deaths within a family have been revealed to be cases of multiple homicide by suffocation.”

Wolkind et al, Acta Paediatr 1993;82: 873-6 studied families with 2 or more cot deaths. They concluded that 55% of these were probably filicide (infanticide). However, it is not clear what conclusion we can draw from this as regards the frequency of homicide masquerading as SID in cases of just one SID in a family.

There seems little doubt that some deaths assigned to the “unexplained” category are, in fact, homicides. But as to what proportion, no one knows. The bearing this might have on the overall child homicide statistics could be considerable. The total number of unexplained infant deaths in 2014 was 212 (in England & Wales). This compares with (identified) child homicide rates of around 70 per year. Hence, if even a small percentage of unexplained infant deaths are actually homicides – as seems inevitable – then this will cause a marked increase in the total child homicides.

We shall see in the next post that, each year, several infant deaths classed as “unexplained” are subject to Serious Case Reviews by the child protection agencies, indicative of suspicious circumstances.