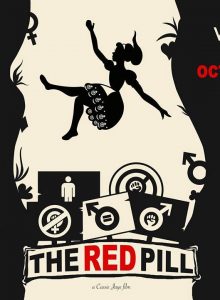 Lamentably, The Red Pill has not been shortlisted for an Academy Award. 145 documentaries qualified for consideration, but TRP was not one of the 15 chosen. Cassie Jaye writes,

Although upsetting, I’m at peace with this. One reason is because I can only assume there would have been an enormous amount of backlash if the film did get shortlisted. Most likely The Academy would have been getting threatening messages urging them to pull The Red Pill from the lineup, or petitions would have been started to protest the Oscars, etc. Although these types of petitions have given the film more publicity in the long run, they also perpetuate many hateful lies about the film which can be difficult to correct and set straight. Another reason I’m at peace with The Red Pill not making the Oscar Shortlist is because this film was not created with the intention of winning awards, the film was created to elevate the discussion around gender politics. Qualifying The Red Pill movie for the Oscars meant that the film was seen by hundreds of Oscar jury members. I’m certain the film inspired many conversations amongst those Oscar members, and for that, I am grateful that the film was in the running!

Forthcoming screenings of TRP in the UK are,

Cassie Jaye herself will attend the Norwich and Birmingham screenings for the Q&A.

As regards general release, Cassie Jaye has signed a deal with a distributor to release TRP worldwide on-line, and as DVD/Bly-Ray and Video-On-Demand via platforms like Netflix, Hulu, iTunes, Amazon, etc. It is currently anticipated that this will happen in March 2017.

Cassie Jaye will be speaking at the International Conference on Men’s Issues in Gold Coast, Australia on June 9th.

9 thoughts on “The Red Pill Latest”