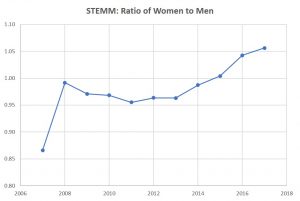 Yes, women do dominate in STEMM, as claimed previously, though not in STEM, which I have never claimed – despite the implications from some quarters

This is the first end-of-cycle report from UCAS (the Universities and Colleges Admissions Service) since Mary Curnock Cook retired as CEO. Each year for several years Curnock Cook took some pains to publicised, in the national press, the failing fortunes of males in university entry. I do not expect a similar response from the new CEO, Clare Marchant.

This article reports on data from UCAS and relates to the UK. UCAS accounts for the overwhelming majority of applications to full time undergraduate higher education courses in England, Wales and Northern Ireland, and about two-thirds of those in Scotland.

Men’s drop-out rate exceeds that of women, so the gender ratio of degrees awarded is set to rise above 36% in three years’ time (if it hasn’t already).

The overall “36%” figure also disguises the very emphatic dominance of women in a large number of subjects. Exposing this latter fact is the principle purpose of this article.

Acceptance data onto courses has just been published by UCAS in their End of Cycle reports. The data files can be obtained from,

I have used the file DR3_014_01 (pdf or csv versions) titled “Subject group by sex” which relates to acceptance onto courses (not merely applications). UCAS list data against 26 broad subject areas. I have further consolidated these into just 17 subject areas by combining related subjects. To be absolutely clear and explicit, the combined categories are,

Figure 1: In 2017 there were fewer men accepted onto HE courses than in 2016. The number of women accepted continued to rise. (All Figures are at the end of the article to avoid breaking up the text).

Figure 2: In 2017 there were 71,100 fewer men than women accepted onto HE courses, more than double the disparity ten years ago. The disparity continues to rise.

Figure 3 (and the graphic which heads this post) shows the ratio of the number of women to the number of men accepted onto STEMM courses. STEMM = Science, Technology, Engineering, Mathematics and Medicine (and subjects allied to medicine). I continue to emphasise, as I always have, the important difference between STEMM and STEM. The latter excludes Medicine and allied subjects. There are those who would pretend to have confused the two in order to attempt to discredit the observation I first made two years ago, namely that women now dominate in STEMM. This remains the case, and Figure 3 shows women’s lead is slowly increasing.

Figure 4 shows the female:male acceptance ratio for STEM, in which men remain the majority but the proportion of  women is slowly increasing.

Figure 6, Education: There are six times more women studying education than men. I leave it to the reader to ponder whether this has a bearing on the other observations made here regarding male educational disadvantage.

Figure 7, Subjects Allied to Medicine: I take this to include nursing, but not exclusive to nursing. Women are four-and-a-half times more numerous in this subject than men (and this ratio is increasing).

Figure 8, Veterinary and Agricultural Sciences: Women are approaching three times more numerous than men, and this ratio is trending upwards.

Figure 8, Languages and Literature: Women are approaching three times more numerous than men, and this ratio is trending upwards.

Figure 9, Law: For the first time in history there are now more than twice as many women as men studying law at university. Thank heavens there is no sex bias in our criminal justice system or in the family courts or I might be rather worried. The ratio is still trending upwards at a significant rate.

Figure 9, Arts/Design: Women outnumber men by more than 80%. There has been a gentle trend upwards over the last 10 years.

Figure 9, Social Studies / Social Sciences: Women outnumber men by more than 60%. There has been a trend upwards over the last 10 years.

Figure 10: Medicine and Dentistry: Women now outnumber men by more than ever before, the former exceeding the latter by just shy of 50%. The trend has been significantly upwards for the last five years.

Figure 10: Biological and Combined Sciences: Women now outnumber men by more than ever before, the former exceeding the latter by just shy of 50%. The trend has been upwards over the last few years.

Figure 11: History, Philosophy, Mass Communication: Women outnumber men by about 15% with a gentle trend upwards over the last ten years.

Figure 11: Physical Sciences: Now we come to the subjects in which men outnumber women. The ratio of women to men studying physical sciences is now 0.77 and is trending upwards.

Figure 12: Business and Admin Studies: the sexes are close to parity (women:men ratio 0.92)

Figure 12: Architecture, Building and Planning: The ratio of women to men is 0.6 but this is trending upwards significantly having been 0.4 ten years ago.

Figure 12: Engineering / Computer Sciences: These are the subjects in which men outnumber women most emphatically, the ratio of women to men being around 0.2. For engineering there has been a slight trend upwards, for computer science a slight trend downwards.

Figure 12: Mathematics: The ratio of women to men is 0.6. This subject is unique in being the only subject in which the trend in this ratio is significantly downwards.

The latter observation bears repeating. The proportion of women is trending upwards in almost every subject bar a few where the trend is flat. Maths is the one exception.

The Executive Summary of the 2017 End of Cycle Report is pretty thin on the disadvantages of being male. This is all it contains on the matter,

“18 year old women were more than a third more likely to enter (HE) than 18 year old men.”

“For 18 out of the 26 subject groups, more women than men were accepted.”

“Within certain subject areas significantly different ratios between men and women exist, the most contrasting of which are Education, with over 6 women for every man, and Computer sciences, with over 6 men for every woman accepted to study.”

This remark, whilst true, appears calculated to give the impression of balance in a situation of emphatic imbalance. In truth, the subject with the highest sex ratio is nursing, into which in 2016 there were 9.5 women accepted for every man. But in 2017 UCAS have not listed nursing separately, instead it occurs only in the combined category “subjects allied to medicine”.

More seriously, neither the Executive Summary nor the more detailed report on applicant characteristics give any clue that the dominance of women is so emphatic in so many subjects (as exposed herein). And so UCAS joints the ranks of those casting a cloak of invisibility over male disadvantage.

The most disconcerting feature of the UCAS reports is the dropping of the demographic histograms which were so revealing in 2015. Consequently I reproduce as Figures 13 and 14 these demographic histograms on HE entry rates from the 2015 UCAS End of Cycle Report. It would have been nice to see how these histograms now look with the 2017 data – but, oddly, they have been dropped. It is clear, though, that the disparities will now be greater not less.

“Equality of representation: The section on equality draws heavily on UCAS’ recent work on understanding the multidimensional nature of disadvantage with reference to HE entry.”

I would claim that this is the opposite of the truth – that the multidimensional nature of the disadvantage in HE is what UCAS succeed in obscuring, not elucidating.

The report refers to the use of a “Multiple Equality Measure” (MEM) to “facilitate more accurate identification of those individuals most and least likely to enter HE”. Yet the measure seems rather to conceal this very issue. It merely refers to “groups” 1 to 5, in order of increasing likelihood of entering HE, but without shedding light on the constitution of these groups. The report includes sections on advantage or disadvantage by ethnicity, geographical area, wealth (FSM) and sex. But by considering these factors separately the “intersectional” issues are neglected – precisely what is brought out clearly by the 2015 histograms reproduced in Figures 13 and 14 below.

The 2017 UCAS report confirms the strong ethnic dependence of HE entry rate. Although ethnicity is not my concern here, the following will be of general interest if only because it explodes popular preconceptions – and implies that Figures 13 and 14 continue to be indicative in 2017 at least qualitatively. In 2017 the average entry rates broken down by ethnicity alone were,

UCAS notes, “the proportional gap between the White ethnic group and all other ethnic groups increased in 2017”.

“Young people from London were more likely than those elsewhere in England to enter HE, with 41.8% of all 18 year olds entering this year. In contrast…..in 2017, 28.9% of 18 year olds from the South West entered HE, making this the region with the lowest entry rate.”

One wonders whether this geographical effect is related to ethnicity or to wealth or to the schools’ funding formula which so favours the inner cities (to the detriment of Gloucestershire, for example).

I really don’t want to stray into race issues, or any political issues broader than gender politics. However, this has rather been forced upon me by Figures 13 and 14. I am hardly the first to note that the oft repeated mantra that white males are privileged is emphatically the opposite of the truth – at least in education. I suppose that merely by directing attention to UCAS’s own data I will now be labelled a white supremacist misogynist.

Figure 1: Total Numbers Accepted onto HE Courses by Sex (click on any Figure to enlarge) 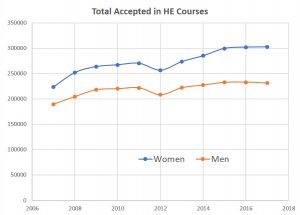 Figure 2: Excess of Women Over Men Accepted onto HE Courses 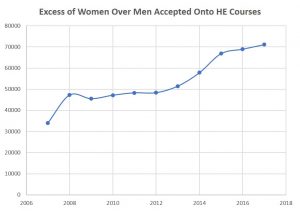 Figure 3: The Ratio of Women to Men Accepted onto STEMM Courses

Figure 4: The Ratio of Women to Men Accepted Onto STEM Courses 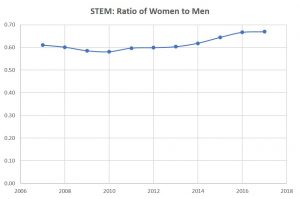 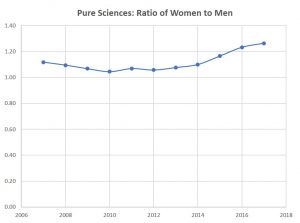 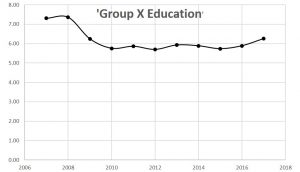 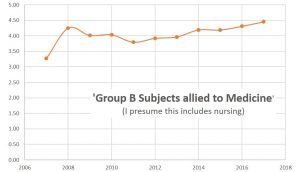 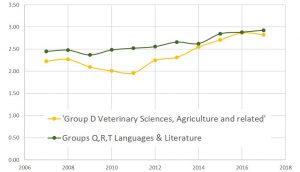 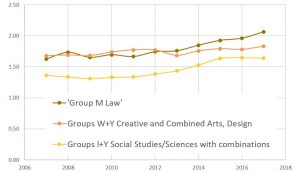 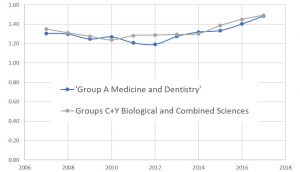 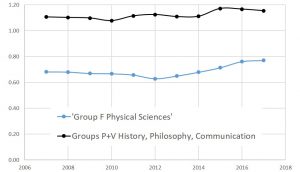 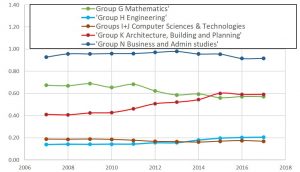 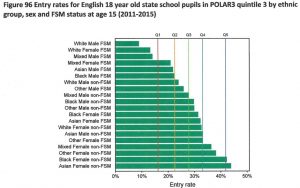 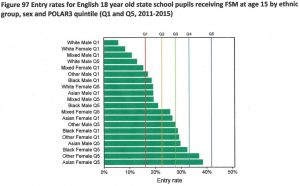