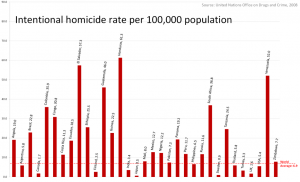 However, some homicide cases have no suspect.

And a suspect is not necessarily convicted.

Focus on: Violent Crime and Sexual Offences, year ending March 2015 – Bulletin Tables Figure 2.4 indicates that 94 of the 517 registered homicides (18%) had no suspect.

Focus on: Violent Crime and Sexual Offences, year ending March 2016 – Bulletin Tables Figure 2.4 indicates that 115 of the 570 registered homicides (20%) had no suspect.

Hence, the number of homicides for which no suspect emerges is substantially greater than the number of women who are tried for homicide offences (roughly double). However, by definition, no data is available on the sex of these unidentified perpetrators of homicide.

“In the 3 years from the year ending March 2013 to the year ending March 2015, 83% of suspects indicted for homicide (murder, manslaughter or infanticide) with a court outcome were found guilty of homicide and 11% were acquitted (Appendix Table 2.16 (1.59 Mb Excel sheet)). Similar criminal justice statistics produced by the Ministry of Justice (MoJ) in their publication Criminal Justice System Statistics Quarterly, December 2014 show that the conviction ratio (the number of convictions within a given period divided by the number of prosecutions in the same period) for homicide offences in 2014 was 88%. This is a relatively high conviction ratio and, for example, compares with 68% for violence against the person offences, and 73% for burglary offences.”

Data in Table 2, covering roughly half of year 2014/15, have been taken from this ONS Homicide Bulletin.

The salient features are,

Men appear to be more likely than women to be convicted, and to be convicted of murder. An analysis of the figures for domestic homicides only for the past six years shows not only that this pattern holds true but that when convicted for manslaughter, male suspects are more likely to be given an immediate and longer sentence. (Immediate custody and life imprisonment is mandatory in all cases for a conviction for murder).

These remarks can be repeated with even greater emphasis now, twenty years later.

# In total, there were 558 suspects in 2014/15 when the data were compiled, relating to 530 homicides recorded in the year ending March 2015, but of these, court proceedings had concluded for only 285 suspects (51% of all suspects). Hence this Table relates to only about half a year’s homicides.

*I suspect this means Infanticide

As noted above, and demonstrated by the comparison of Tables 1 and 2, the relatively harsher treatment of men compared with women has become substantially more marked in the last 20 years. Thus, the situation regarding the treatment of homicide suspects in the UK criminal justice system is qualitatively similar to that of crimes in general, namely a harsher treatment of men as discussed here and here.

As always, the conundrum is whether this harsher treatment reflects men’s more serious offending. If this were the correct explanation, then the increasing sex differential between 1995/96 and 2014/15 would suggest that male killers are becoming even more nasty and female killers more benign. But there is a less contrived explanation readily at hand. This period has seen the rise of VAWG programmes which drive a harsher treatment of male offenders, together with lobbying like the Corston Report which drives a more lenient approach to female offending, avoiding imprisonment. The fact that this sex differential in sentencing policy can now be seen reflected in sentencing outcomes hardly requires any further explanation.

Both the numbers, and perpetrators, of child homicides in the UK are subject to considerable obfuscation. The position has been summarised here and the rest of this Section is a brief précis of that article. According to official statistics, in recent years there have been roughly 65 child homicides in England and Wales annually (up to about ten years ago this was more like 90 per year). The overwhelming majority of child homicides are carried out by a parent or parents, or a parent’s partner, or some combination thereof.

The most significant feature of child killing, and a fact that is kept well away from public consciousness, is that mothers are responsible for the majority of them. Even more politically incorrect is the observation that single mothers account for a disproportionate number of child homicides.

Infanticide and neonaticide are the province of mothers, and there is reason to be concerned that these child deaths do not feature fully in the homicide statistics.

An extremely small proportion of infanticide cases are brought to court. What few convictions for infanticide occur are almost invariably the result of a murder charge being downgraded to infanticide – and the sentence is almost never custodial. The rate of neonaticides is unknown but might be hundreds per year.

And then there is SIDS (sudden infant death syndrome, or ‘cot death’). In recent years there have been roughly 150 SIDS deaths annually (and it used to be twice as many). It is generally believed that a substantial proportion of SIDS deaths are covert homicides. A fact which the politically correct will never mention is that the rate of SIDS is four times as great among single mothers as among married mothers.

In short, there may be hundreds of infant homicides that are not recognised as such in the official statistics, and these are overwhelmingly due to mothers as perpetrators.

Unless, and until, infant deaths which are actually homicides are recorded as such, the issue of the sex ratio of perpetrators of homicide cannot be properly addressed.

Some people might count abortions as homicides. If so, they dwarf all other homicides, the current annual rate in England & Wales being around 186,000. I wouldn’t go so far as some in equating an abortion within (current) legal time limits with homicide. I’m inclined to think that such abortions are preferable to bringing an unwanted child into the world. But it seems that many of the pro-abortion lobby are in favour of eliminating any time limit. For viable foetuses, and particular those nearing full term, abortion becomes functionally and morally identical to homicide. Monstrously, a supporter of this right-to-kill includes the Royal College of Midwives. What this betrays is a mindset amongst some women that they have a right to decide upon life and death of their child. The significance of this in the present context is that it makes credible the suggestion that covert neonaticides are common.

3 thoughts on “Perpetrators of Homicide by Sex”